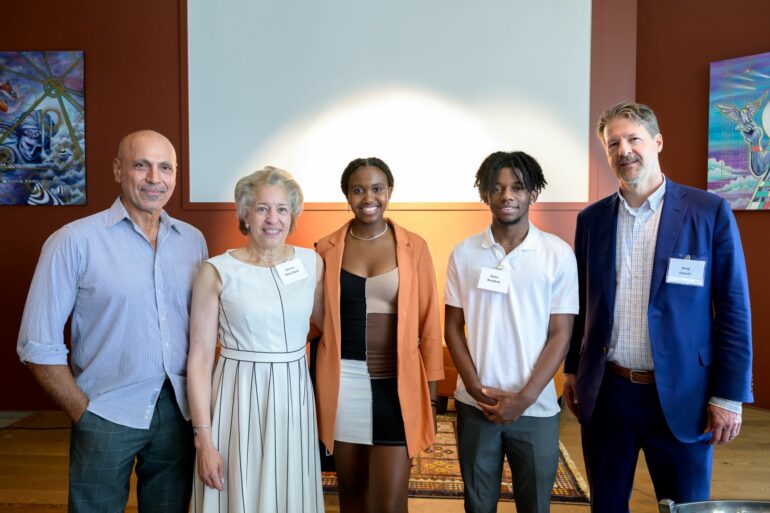 The Community Foundation of Howard County has announced Dylan Bradford and Mia Swaby-Rowe as the inaugural winners of the Nikole Hannah-Jones Scholarship Award program. Established by The Howard Hughes Corporation® in honor of Pulitzer Prize-winning journalist Nikole Hannah-Jones, creator of the “1619 Project” for The New York Times Magazine, the scholarship promotes the values of equity and justice. Bradford, a graduate of Reservoir High School, and Swaby-Rowe, a graduate of Wilde Lake High School, will each receive a $5,000 scholarship award.

The Nikole Hannah-Jones Scholarship is available each year to two Black Howard County public school students who have been accepted into a two- or four-year college or university. Applicants were evaluated and selected by The Community Foundation of Howard County based on community service, civic involvement and other activities, letters of recommendation and educational transcripts. Applicants were also asked to submit a short essay responding to the question, “What should racial justice look like in America?”

“Nikole Hannah-Jones is a ground-breaking, investigative journalist known for her coverage of civil rights and racial injustice, and an inspiring leader. Establishing a scholarship in her name recognizes her accomplishments and is designed to encourage today’s bright students, who represent our country’s future and the young leaders of tomorrow, to explore and tackle the critical issues of social equity and justice,” said Greg Fitchitt, President, Columbia, for The Howard Hughes Corporation.

Bradford is headed to Massachusetts Institute of Technology where he plans to study engineering. At Reservoir High School, he was a member of the National Honor Society, French Honor Society and National Society of Black Engineers. He served as president of Reservoir High School’s Alpha Achievers, played in the school’s Concert Band and attended Howard County Leadership U. He was named Varsity Soccer’s Most Valuable Player and was on the Varsity Indoor Track and Varsity Outdoor Track teams. He is also an active volunteer at Mt. Pisgah AME Church.

Swaby-Rowe intends to study kinesiology at the University of Maryland. At Wilde Lake High School, she was a member of the National Honor Society. She won the Principal’s Ohana Award at graduation for promoting leadership at Wilde Lake High School, as well as winning the school’s Social Studies Award. She was the Class Council representative for the school’s Student Government Association and president of the Black Student Achievement Program. A four-year starter and senior captain of the basketball team, she was Second Team All-County in basketball and a two-year starter in volleyball, earning the Wildcat Award for spirit. Swaby-Rowe helped establish Rise Up, a student mentoring program at Wilde Lake High School, and was a member of the Youth in Philanthropy program at the Community Foundation of Howard County.

Hannah-Jones was the featured headliner at the 2021 Books in Bloom festival presented by The Howard Hughes Corporation and the Downtown Columbia Partnership in Color Burst Park in Merriweather District last October. Hannah-Jones recently joined Howard University’s School of Communications as the Knight Chair of Race and Journalism.

About The Howard Hughes Corporation®

The Howard Hughes Corporation owns, manages and develops commercial, residential and mixed-use real estate throughout the U.S. Its award-winning assets include the country’s preeminent portfolio of master planned communities, as well as operating properties and development opportunities including: the Seaport in New York City; Downtown Columbia®, Maryland; The Woodlands®, The Woodlands Hills®, and Bridgeland® in the Greater Houston, Texas area; Summerlin®, Las Vegas; Ward Village® in Honolulu; and Douglas Ranch in Phoenix. The Howard Hughes Corporation’s portfolio is strategically positioned to meet and accelerate development based on market demand, resulting in one of the strongest real estate platforms in the country. Dedicated to innovative placemaking, the company is recognized for its ongoing commitment to design excellence and to the cultural life of its communities. The Howard Hughes Corporation is traded on the New York Stock Exchange as HHC. For additional information visit www.howardhughes.com.

The Community Foundation of Howard County serves as a knowledgeable, trusted partner that forges connections between donors and nonprofit organizations to provide impactful investments in Howard County. Since 2020 the foundation has awarded more than $6.3 million across 1,257 grants to organizations delivering human service, arts and cultural, educational and civic programs.