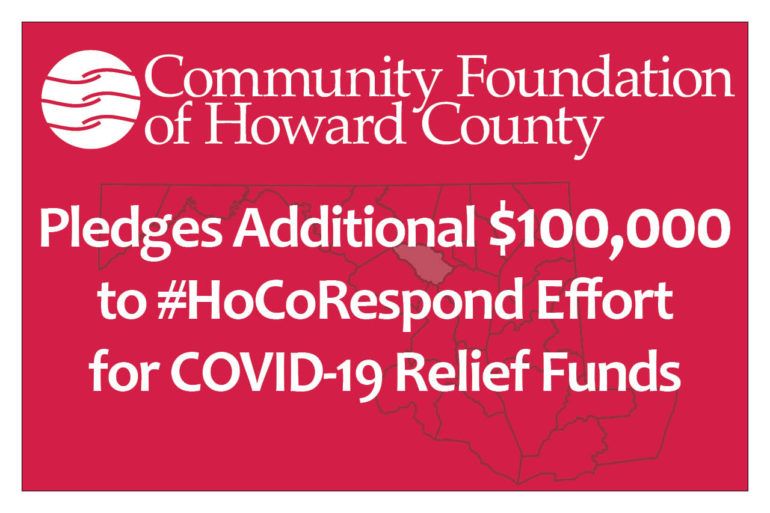 The Community Foundation of Howard County (CFHoCo) has announced it will contribute an additional $100,000 of rapid relief funds in a second wave of funding to help mitigate the damage of COVID-19 across Howard County. The CFHoCo board of trustees unanimously passed the resolution to release the funds. This $100,000 comes on top of an original $103,000 raised through its Howard County Community Relief Fund efforts in March and early April, as well as an additional $65,000 in gifts directly to nonprofits from individuals and families with CFHoCo donor advised funds.

“Community foundations exist to help in times like these,” said Beverly White-Seals, President and CEO of CFHoCo. “I’m proud of the way our board of trustees worked to quickly identify and release additional funding that is so desperately needed right now. I continue to be amazed by the generosity of our donors in support of vital programs and organizations across Howard County.”

The $100,000 will be released into the pool of funds coordinated by HoCoRespond.org, a collaborative leadership funding group consisting of the Community Foundation of Howard County, the Horizon Foundation, the Women’s Giving Circle of Howard County and the United Way of Central Maryland.

The HoCoRespond group initially set a goal to raise $100,000 in 10 days in late March and early April. More than $200,000 was raised through the generosity private individuals and foundations. HoCoRespond awarded $205,000 in grants to 13 nonprofits on April 20. With such great needs throughout the community, that funding could only go so far. A total of 56 eligible 501c3 nonprofits requested funding.

Now a second campaign has begun with even more ambitious goals. The second fundraising wave calls for a goal of $200,000 in five days – twice the goal in half the time. The CFHoCo board of trustees quickly agreed to step up to meet the challenge. The gift will come from unrestricted operating funds.

“This is the moment for community foundations to step forward,” stated Peter Panepento, president of the CFHoCo board of trustees. “Across the nation, community foundations are rising to the challenge and providing immediate resources to make a major impact locally. Our board understands the critical role CFHoCo plays in Howard County, and we will continue to be a leader in helping the people in our community.”

“We contemplated using these funds as a matching gift challenge, but the needs are too immediate and too large,” added White-Seals. “This funding needs to get out as soon as possible. We encourage anyone with the capacity to give what they can to the Community Relief Fund or make contributions directly to nonprofits from their donor advised funds. Together we will get through this.”