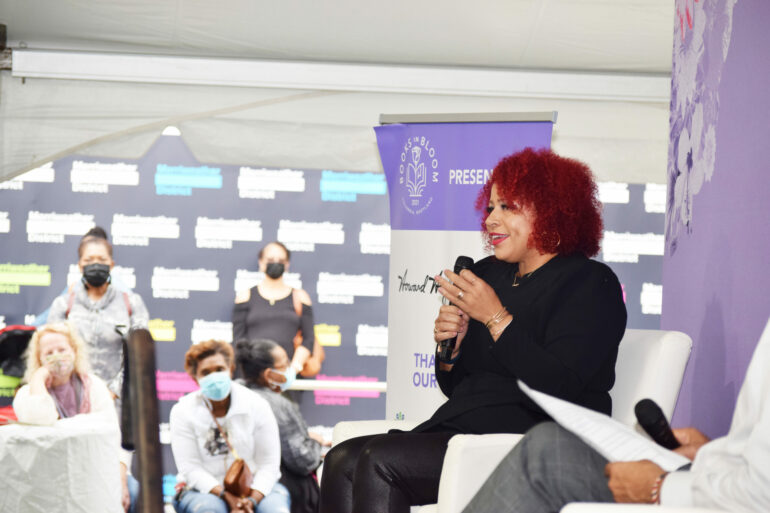 The Howard Hughes Corporation, the community developer for Downtown Columbia, has established a scholarship in honor of Pulitzer Prize-winning journalist Nikole Hannah-Jones, creator of the “1619 Project” for The New York Times Magazine.

The $10,000 Nikole Hannah-Jones Scholarship will be presented to two Black or African American seniors attending Howard County public high schools who have been accepted to attend college. Each year, two $5,000 scholarships will be awarded. Howard Hughes Corporation created the scholarship in partnership with the Community Foundation of Howard County, who will administer the awards under the umbrella of the foundation’s scholarship program.

“Nikole Hannah-Jones is a ground-breaking journalist and inspiring leader. Establishing a scholarship in her name recognizes her accomplishments and her example as a torch bearer for the values of equity and justice,” said Greg Fitchitt, President, Columbia, for The Howard Hughes Corporation.

The Community Foundation of Howard County will evaluate all applications for the scholarship and will select awardees based on community service involvement and other activities, letters of recommendation and transcript. Financial need will be considered but is not required for selection. Applicants are also asked to submit a short essay responding to the question, “What should racial justice look like in America?”

“We’re so pleased to work with Howard Hughes Corporation to help establish the Nikole Hannah-Jones Scholarship,” said Beverly White-Seals, president and CEO of the Community Foundation of Howard County. “Howard Hughes Corporation is a great partner, and we applaud its continued support of education and young people. This scholarship exemplifies how our corporate community can make a tangible difference in Howard County. As one of our largest annual scholarship awards, the Nikole Hannah-Jones Scholarship will provide educational opportunities to deserving students every year.”

Nikole Hannah-Jones is an investigative journalist covering racial injustice and is known for her coverage of civil rights in the United States. She recently joined Howard University’s School of Communications as the Knight Chair of Race and Journalism. She was the featured headliner at the 2021 Books in Bloom book festival presented by the Downtown Columbia Partnership in Color Burst Park in Merriweather District last October.

The Nikole Hannah-Jones Scholarship will be awarded annually, and awardees for their freshman year may re-apply for their sophomore, junior and senior years, so long as they remain enrolled and in good standing.

A development of The Howard Hughes Corporation®, Downtown Columbia is located at the center of Columbia, MD, one of the first master planned communities in the U.S., founded by legendary developer James W. Rouse in 1967. Conveniently located between Washington, DC and Baltimore, Columbia comprises 14,000 acres including ten completed residential villages and a deep pipeline of commercial development opportunities within its Downtown. At full buildout, the redeveloped 391 acres of Downtown Columbia will include three new and reconfigured neighborhoods—Merriweather District®, Lakefront District and Central District—featuring more than 14 million square feet of residential, office, hotel, retail, cultural and public spaces including public parks, trails and more. For more information about The Howard Hughes Corporation’s redevelopment of Downtown Columbia and the creative hub under development in the Merriweather District, please visit www.merriweatherdistrict.com

About The Howard Hughes Corporation®

The Howard Hughes Corporation owns, manages and develops commercial, residential and mixed-use real estate throughout the U.S. Its award-winning assets include the country’s preeminent portfolio of master planned communities, as well as operating properties and development opportunities including: the Seaport in New York City; Downtown Columbia®, Maryland; The Woodlands®, The Woodlands Hills®, and Bridgeland® in the Greater Houston, Texas area; Summerlin®, Las Vegas; Ward Village® in Honolulu; and Douglas Ranch in Phoenix. The Howard Hughes Corporation’s portfolio is strategically positioned to meet and accelerate development based on market demand, resulting in one of the strongest real estate platforms in the country. Dedicated to innovative placemaking, the company is recognized for its ongoing commitment to design excellence and to the cultural life of its communities. The Howard Hughes Corporation is traded on the New York Stock Exchange as HHC. For additional information visit www.howardhughes.com.

The Community Foundation of Howard County serves as a knowledgeable, trusted partner that forges connections between donors and nonprofit organizations to provide impactful investments in Howard County. In 2020 the foundation awarded more than $3.6 million across 457 grants to organizations delivering human service, arts and cultural, educational and civic programs. For more information, visit CFHoCo.org.