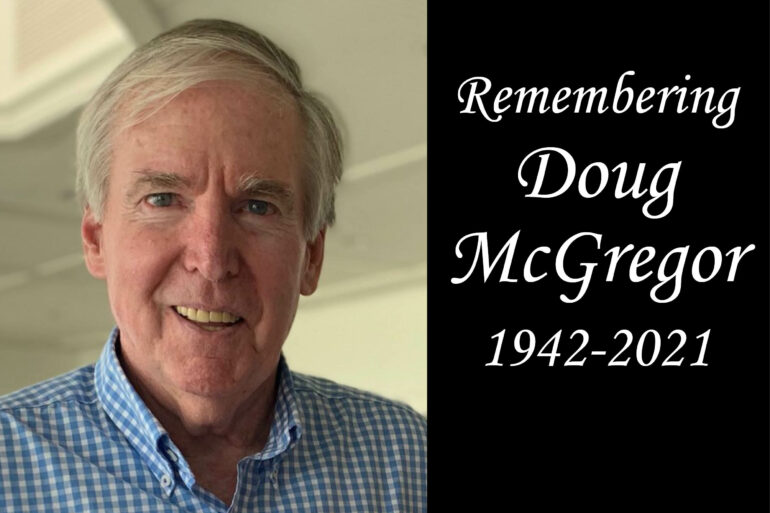 Doug McGregor of Sanibel Island, Florida, one of the driving forces behind the development of Columbia and the growth of The Rouse Company, died peacefully in his sleep on February 28 in Potomac, Maryland with his family at his side. He was 78 and succumbed to complications from Merkel-cell carcinoma.

Douglas Arthur McGregor was born on March 23, 1942 in Queens, New York to Ronald and Florence McGregor. His father, who once played baseball in the New York Yankees farm system, worked for Consolidated Edison and his mother was a homemaker. He grew up in Queens and on Long Island where he attended the former Seton Hall High School. He majored in philosophy at Rutgers University, graduating in 1963, and earned a law degree from the Case Western Reserve University School of Law in 1967. He practiced law in Cleveland from 1967-1969, and then joined Computer Analysts, Inc. in Cleveland as director of new business and, later, became President.

In 1972, Doug joined The Rouse Company as a senior development director working on the Columbia master planned community. He became General Manager of the project in 1975 and directly guided its evolution and operation until 1993. In 1985 he led Rouse’s entrance into the high-rise office business and in 1990 became responsible for all development including shopping centers. Operation of all company properties was added to his mandate in 1993. He was appointed Vice Chairman and Chief Operating Officer in 1998 and remained an advisor to the chairman after his retirement in 2002 until 2003 when he relocated to New Hampshire. Additionally, he retired as a director of Baltimore-based Municipal Mortgage & Equity, LLC in 2014.

In each of these roles, Doug was a key contributor to the extraordinary growth in scale and in value of The Rouse Company. While Columbia’s General Manager, the community’s population grew from under 30,000 to over 75,000 and it became a major employment center with over 50,000 jobs. Between 1985 and 1992, he oversaw the development of high-rise office towers in Baltimore, Portland, Seattle and Phoenix. From 1990 to 2002, the company opened three new regional shopping centers and expanded and/or renovated 23 others to keep them competitive in their markets. Some of his most impactful contributions were to the company’s acquisition program which involved over $4 billion in transactions between 1985 and 2002. Particularly noteworthy was the purchase of the Howard Hughes Corporation in 1995 which brought Las Vegas’ Summerlin, the nation’s then best-selling master planned community, into the Rouse portfolio.

“Doug was a modern-day Renaissance Man,” offered a long-time colleague. “Quote Dante in Italian, discourse on Botero’s artistic style, effortlessly use eleemosynary in a sentence, debate arcane real estate law, complete a triathlon or ski double-black diamonds. He could do it all.”

He is survived by his high school sweetheart and spouse of 57 years, Karen Lou McGregor; a daughter, Molle McGregor Johnson and her spouse Barry Johnson, and their sons Ash and Harper, of Asheville, North Carolina; a son, Brian McGregor and his spouse Thayer Sargent McGregor and their children Peter, Samuel, and Alexandra of Potomac, Md.; his sister and brother-in-law, Irene and Michael McCoy of Connecticut, and their son Geoffrey; as well as numerous beloved nieces and nephews.

Doug devoted his life to his wife and family and took special joy in responding to friends and family seeking mentoring, expertise and love. He knew no limits in helping those whose lives could be bettered by his guidance.

Doug and his wife Karen have long been supporters of the Community Foundation. Doug served on the board of trustees of the then-named Columbia Foundation. The couple created the the Douglas and Karen McGregor Fund at the CFHoCo in 1987.

He was a tireless volunteer for and financial supporter of the schools of his children and grandchildren including Garrison Forest School, serving as a trustee for many years, as well as The McDonogh School, Middlebury College in Vermont, and Carolina Day School in Asheville.

An outdoor celebration of his life is being planned for this summer.