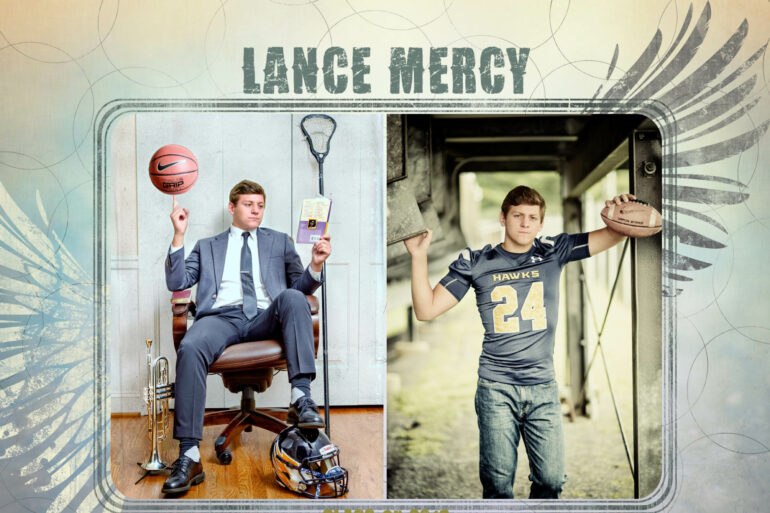 The family of Lance Mercy has established a new endowed scholarship at the Community Foundation of Howard County. The Lance Christopher Mercy Scholar-Athlete Scholarship will award a minimum of $1,000 each year to a graduating senior at River Hill High School.

This scholarship is offered in loving memory of Lance Christopher Mercy, who tragically passed away in a car accident in May 2020. Lance was a 2018 graduate of River Hill High School and had just completed his sophomore year at Florida State University, where he majored in both Accounting and Professional Sales.

“Lance had such positive experiences both academically and athletically at River Hill,” stated Tricia Mercy. “We knew we wanted to honor his memory by establishing a scholarship that would benefit future “Hawk” scholar-athletes. Lance’s involvement in the River Hill football and lacrosse programs helped shape him into the confident, hard-working young man we all loved and enjoyed so much. Our family recognizes the life-long values that team sports provide and the importance of a high-quality education. We are proud to remember Lance in a way that will help future River Hill athletes reach their educational goals.”

The foundation invests the donations, handles the accounting and provides tax receipts to donors. The family then has up to one year to decide which qualified 501(c)3 nonprofit(s) should receive the accumulated funds. Or, as the Mercy family chose to do, create a permanent fund at CFHoCo. Many friends contributed to the memorial fund, and then the Mercy family contributed the additional funds to reach the $20,ooo minimum to establish an endowed scholarship at the foundation.

“It’s been a privilege to support the Mercy family through this process as they honor the memory of Lance and secure his legacy at River Hill High School,” said Dan Flynn, the director of development, marketing and communications at CFHoCo. “This is also another example of how CFHoCo is here for Howard County. We’re proud to offer many services and expertise to help people meet their philanthropic goals.”

Lance was passionate about sports and was a leader both on and off the field. Lance was so proud to be a “Hawk” and his skills as a defensive end helped lead the River Hill football team to a county championship during his senior year. He was also a key defenseman and defensive captain for the River Hill lacrosse team.

“Lance was an outstanding student-athlete at River Hill High School,” said Brian Van Deusen, a math teacher and the head football coach for the Riverhawks. “As a starter on the varsity football and lacrosse teams, he demonstrated strong leadership qualities and a great work ethic both on the field and in the classroom. Lance was always enthusiastic during practices and strived to be the best player he could be.”

Everyone who met Lance was immediately drawn to his calm and easy-going personality. Through his hard work and kind nature, Lance left a lasting impact on many lives. He worked several summers at Camp Hemlock in West Virginia as a Camp Counselor. Young campers enjoyed having him lead week-long hiking and canoeing trips and perform skits for nightly campfires.  Lance had a remarkable ability to sense and understand how those around him felt.  He helped classmates when they were struggling and cheered friends up with his positive attitude and fun-loving spirit.

Most of all, Lance placed tremendous value on his friendships. He often went out of his way to include others, even when doing so was not the most popular option. He invested a great deal of time building lasting bonds with his many friends and treated everyone he met with genuine kindness, acceptance and respect.

“I can honestly say that Lance was one of the most selfless players that I have had the privilege to coach,” remarked Keith Gonsouland, an English teacher and head lacrosse coach at River Hill. “He provided quiet leadership. He was a young man who always did the right thing! Lance became a captain because the coaching staff and team respected his work ethic. He was never about bragging or boasting. Instead, he put the work in to be the best teammate and player that he could be.”

Lance’s life motto can be summed up in just six words: Work Hard, Have Fun, Be Kind.

Recipients of the Lance Christopher Mercy Scholar-Athlete Scholarship are named to reflect Lance’s attitude towards life and continue his legacy.

The Community Foundation of Howard County serves as a knowledgeable, trusted partner that forges connections between donors and nonprofit organizations to provide impactful investments in Howard County. The foundation has awarded more than $26 million in grants to organizations delivering human service, arts and cultural, educational and civic programs. Money for the scholarship and grant programs comes primarily from income generated by the foundation’s endowment supported by more than 300 funds established by Howard County businesses, families and individuals. For more information, visit CFHoCo.org or call 410-730-7840.